With sunshine on average of over 300 days a year, and temperatures between 30C and 40C during the summer, North Cyprus is perfect for a summer or winter sun holiday.

Famagusta’s historic city centre is surrounded by the fortifications of Famagusta, which have a roughly rectangular shape, built mainly by the Venetians in the 15th and 16th centuries, though some sections of the walls have been dated earlier times.

From the Assyrians to the Egyptians, the Persians to the Romans, Cyprus has seen hordes of visitors disembark on her shores over the centuries – each leaving their distinctive mark on the varied landscape.

The Turkish Republic of Northern Cyprus (TRNC, Turkish Kuzey Kıbrıs Türk Cumhuriyeti) is a republic on the northern and eastern side of the island of Cyprus. Turkey is currently the only state which recognizes the TRNC. Cyprus itself is an island in the Mediterranean Sea, south of Turkey. After Sicily and Sardinia, Cyprus is the third largest island in the Mediterranean Sea.

Cyprus gained its independence from the United Kingdom in 1960. Despite a constitution which guaranteed a degree of power-sharing between the Greek Cypriot majority and the Turkish Cypriot minority, the two populations – with backing from the governments of Greece and Turkey, respectively – clashed vehemently in 1974, with the end result being the invasion and occupation of the northern and eastern 36.7% of the island by Turkey. In 1983, the Turkish-held area declared itself the “Turkish Republic of Northern Cyprus”. So far, only Turkey recognizes the TRNC, while all other governments and the United Nations recognize only the government of the Republic of Cyprus over the whole island. The UN operates a peacekeeping force and a narrow buffer zone between the two ethnic groups.

The climate of North Cyprus is a healthy one, typically Mediterranean. The summers are long and hot, while the winters are short with little rainfall. Cold winds, frost and snow are virtually unknown in North Cyprus. Precipitation normally takes the form of rain, but occasionally snow falls on the Girne mountain range, vanishing as quickly as it came. The coldest month is January which averages 10°C, while the hottest is July with an average temperature of 40°C. The annual mean temperature is 15°C.

Central plain with mountains to north and south; scattered but significant plains along southern area.

Note that Cypriot cities have a variety of historical spellings and writings, all in fairly common use, and which change according to the context, whether it be Greek Cypriot, Turkish Cypriot or English. The following list emphasizes traditional English spellings, that will most often be encountered by the traveller.

As Northern Cyprus is not an internationally-recognised state, the rules for entry are a little confusing, but far more relaxed than they were just a few years ago, and entry is certainly not difficult.

For stays of up to 90 days, visas are not required for any nationality except for citizens of Armenia and Nigeria.

Citizens of any country in the European Union and Turkey may enter using a national ID card in lieu of a passport.

All visitors to Northern Cyprus need to pass through TRNC immigration. At land border crossings, travel documents are not stamped. At TRNC sea/airports, foreign passports are issued with an entry stamp valid for 90 days, while foreign ID card holders fill out a white form (optional at Ercan airport), which is then stamped.

TRNC stamps are no longer a problem for later visits to Greece or Cyprus for EU citizens.

Beware that if you are not an EU/EFTA citizen and you enter the island at the north, the officials in the south may deny you entry, although they only perform spot checks that may be cursory (i.e. they may not check your stamps).

The Ledra Palace crossing, previously a pedestrian-only crossing for non-dplomats, can now be used by ordinary cars.

Northern Cyprus main airport is called Ercan Airport. All flights are connected from Turkey. This means all flights (including charters) must touch down in Turkey before continuing to Ercan. Scheduled flights on Turkish Airlines, Atlasjet and Pegasus connect via various destinations in Turkey, and countries such as the UK, Germany and Iran.

It is also possible to fly to airports in southern Cyprus (Larnaca is the closest) and take a taxi to the north, crossing the Green Line near Nicosia. It is best to have a travel operator arrange for a taxi from the north to collect you, since Greek Cypriot taxi drivers may not be willing to take tourists to the north.

You can pass through easily from Larnaca Airport to the North Cyprus by the Derinya Gate which started to used on last November. Your trip will be shorter by that way than others.

It is also possible to take a taxi to the Ledra Palace crossing and arrange for a rental car to be delivered to you on the northern side.

Going to and from the Republic of Cyprus

After the accession of Cyprus to the European Union, the restrictions on travel to the north from the Republic have been lifted. From the EU’s point of view, the entire island is a part of its territory and thus, there can be no restrictions on EU citizens (including Cypriots) travelling across the Green Line.

The official language in Northern Cyprus is Turkish although a distinct Turkish Cypriot dialect is used in conversation. English is much less popular than in south Cyprus but could still be well understood, especially in the resort town of Kyrenia. However, the entire island is somewhat of a cultural melting pot and in villages off the beaten track, some elderly locals who lived among Greek Cypriots before 1974 still use the Greek Cypriot dialect as their first language, even though they are Turkish Cypriots.

The Queen’s Window at the St. Hilarion Castle

Northern Cyprus is home to many fascinating sights, below is just a selection: 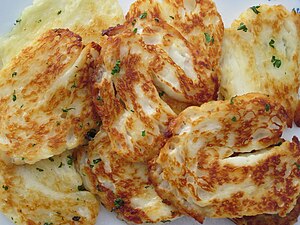 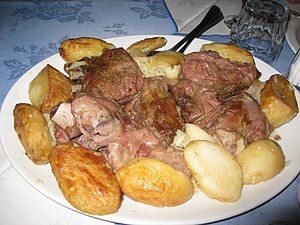 And here are some local desserts. Turkish Cypriot cuisine offers a huge variety of desserts so this list is far from complete:

Of course, traditional European restaurants exist too, from the basic fish and chips providers up to expensive haute cuisine. More recently, Indian curry houses have been opening and there are some good Chinese and Thai restaurants also. The fast-food chain Burger City, directly linked to Burger King, has restaurants in all district capitals apart from İskele. Turkish food, such as döner, adana kebap and tantuni is also widespread.

For those self-catering, food of many types and nationalities can be found in the many supermarkets. Even pork cuts can now be found from specialist retailers.

For vegetarians and vegans, Northern Cyprus can be a tough place, but virtually all restaurants and cafes serve salad varieties in the cities, though the traditional restaurants in less touristy areas may not. 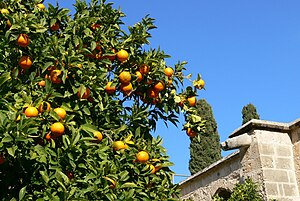 Orange tree at Bellapais – Northern Cyprus is known for the taste of its oranges – and their juice!

As for non-alcoholic drinks,

The electricity is 240 volt and the UK style 3 rectangular pinned plugs and sockets are used. Be warned that power cuts are fairly frequent and that the proper voltage is frequently over- or under-shot, which can be damaging to anything plugged in.

Dial 155 for police, from any phone without charge.

Northern Cyprus is a relatively safe place, as tourists do not have to worry much about crime. In Girne, British retirees often speak of how safe they feel there, and that they can walk down dark streets at any time of night and feel safe. Crimes such as pickpocketing are unheard of, even in the bigger cities and lively areas, such as the Dereboyu quarter of Nicosia.